The 1st IAS Conference on HIV Pathogenesis and Treatment took place in Buenos Aires, Argentina. As with any international HIV conference of merit, the ever increasing role of pharmacology was reflected in the number of posters, oral presentations and invited lectures, devoted to the subject.

These included evaluations of drug-drug interactions particularly in the context of more complex therapies and an exciting glimpse into the future from Professor David Back who gave an overview of pharmacogenomics – the potential for truly bespoke prescribing?

David Back’s began his presentation by reminding us that ‘there’s nothing new under the sun’ and furnishing us with a brief historical overview of pharmacogenomics [1]. Starting with Pythagoras’ recognition of the dangers of ingesting fava beans (indicating G6PD deficiency), he continued with benchmarks such as Mendel’s rules of hereditary and the first time the term was coined (by Vogel in 1957), and then swiftly brought us forward to the present day and the more recent identification of polymorphisms in transporters.

He describes pharmacogenomics as ‘the study of the genetic basis of the differences between individuals in responses to drugs in order to tailor drug administration to individual genotypes’. Genetic variability can alter both pharmacokinetics and pharmacodynamics of how an individual responds to a given agent. At present within HIV treatment, drugs are prescribed according to the tenet that ‘one dose fits all’. Unfortunately a number of people do not respond to treatment despite taking their medication as prescribed, and others manifest unacceptable levels adverse events. He explained that adverse events are ‘ a major cause of morbidity and mortality with recent figures indicating this to be the fourth commonest cause of death in the USA.’ Therefore the ultimate goal of pharmacogenomics must be to produce more personalised drug regimens tailored to the individual genotype in order to maximise benefit and minimise risk from existing drugs.

In relation to HIV and its treatment, the areas of particular importance are polymorphism in drug metabolising enzymes and transport molecules. Back suggested that the potential outcome of someone possessing either a poor or ultra-rapid metaboliser genotype will be reflected in their PK profiles and in turn their response to treatment. He discussed some of the polymorphic enzymes involved in drug disposition in relation to different ethnic groups and reported ‘quite a lot of difference in ethnicity’ [Fig.1] 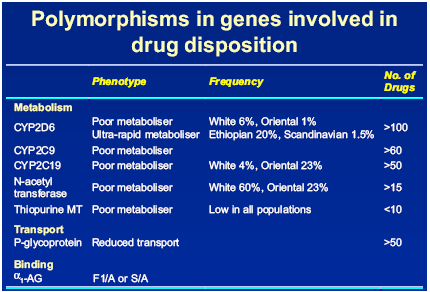 Another area of great interest – CYP 3A4 – the isoform involved in the metabolism of protease inhibitors and NNRTIs was until quite recently believed to have little variability among populations. It is beginning to emerge however, that the 3A4 system has several polymorphisms, Back explained that although the frequency and functional consequences of these variability’s are still being determined, it would be fair to assume that variable expression of 3A4 will affect an individual’s metabolism and may explain the range of interpatient variability of PIs and NNRTIs [Figs 2 and 3]. He summed up this part of the discussion with a recent quote from Gellner saying that ‘…the elucidation of genetic factors controlling a patients inducibility and activity of CYP3A could permit individual dose adjustments in therapies with its substrates and lead to identification of subpopulations with increased risk of developing toxicities.’ [2] 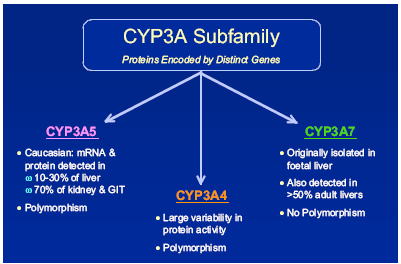 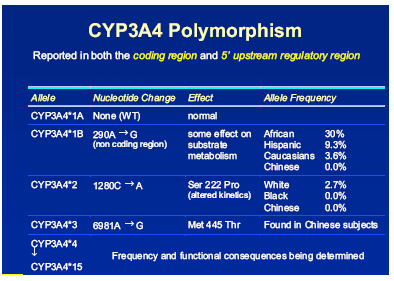 Therapeutic drug monitoring: a must for clinical practice?

In his lecture on therapeutic drug monitoring (TDM) David Burger first described the rationale for its use in clinical practice. He also presented results from his own groups’ ATHENA study of treatment-naive patients randomised to receive TDM or standard of care, (which we reported extensively in HTB XX) And from the French Pharmadapt trial of treatment-experienced patients, in which he examined limitations with the study design that could explain the negative findings ie no difference between the TDM and control groups.

He concluded that following the ATHENA results was sufficient data to recommend the use of TDM for indinavir and nelfinavir and that more data will be forthcoming over the next year or two.

Drug interactions in HIV medicine: how much do they matter?

For the third invited pharmacology lecture, Stephen Piscitelli explored the subject of drug interactions in treating HIV. He began by highlighting the dramatic changes that have occurred in this area of medicine over the past 5 years [5]. With the onset of PI use possible interactions were of a major concern to both patients and clinicians, they were considered a problem to be avoided and the role of the pharmacologist increased. He joked that at this time pharmacologists would ‘…follow patients around in case they ingested something that could have an interaction.’ More recently however interactions, particularly with ritonavir to boost other PIs are exploited extensively for the patients’ benefit in order to: improve adherence, increase drug levels, lower pill burden, improve convenience and lower costs. However he noted that although great strides have been made in understanding the mechanisms and effects of interactions – the role of CYP450 isoforms, p-glycoprotein and other transporters and pregnane X receptor – much less attention has been paid to their management. In other words ‘…we can identify a problem but we’re not so great at addressing them.

Several studies have shown what to expect when two drugs are administered together, but clinicians are unclear about how to then dose adjust to optimise their use. In addition evaluations of 2-drug interactions are not at all reflective of clinical practice and the ‘…paucity of multi-drug interaction studies provides little assistance to the clinician who is often left relying on observance of adverse effects or treatment failure s to whether a significant drug interaction has occurred.’ [6]

He explained that there are serious limitations to evaluating HIV drug interaction literature, particularly that: it is such a rapidly changing field, that single or acute dosing studies may not accurately reflect steady-state conditions, that most studies identify an interaction rather than address a problem. He also urged that we evaluate the literature very critically as particularly with small studies, what appears to be an interaction many actually be interpatient variability.

In addition to interactions between antiretrovirals and other prescribed medicines Piscitelli also discussed the issue of herbal medicines, which are used widely by people with HIV in the US. To date his group has published two studies – one showing the effect of St John’s Wort on indinavir (producing a 57% drop in indinavir levels), and another showing that garlic supplements decreased saquinavir levels by 51%. He also mentioned their as yet unpublished data, which shows no significant change in indinavir AUC after three weeks of co-administration with milk thistle.

For all agents though there are limitations to predicting drug interactions in individuals in clinical practice. Most in vivo and in vitro studies evaluate 2-drug regimens and the results may not be reflective of regimens used in patients particularly if they contain three or more drugs with opposing effects on CYP3A4.

As for the future, he recommends- improved drug interaction databases that are updated frequently (such as the University of Liverpool), more research into multi-drug interactions and better understanding of the effects of herbal medicines on antiretrovirals. In addition, TDM initiatives, ‘If you could ever make a case for using this, its with a patient on 6or 7 drugs, and use of common sense. ‘So we can do a better job at managing our patients’.