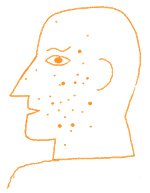 Although many drugs are linked to rash, the severity of rash and how long it lasts can vary a lot.

With some drugs, if you develop a rash during the first few weeks of therapy you must report this immediately to your doctor. This is because it can sometimes lead to very serious reactions.

Other rashes can be mild and disappear without treatment, or can be easily treated with antihistamine drugs such as cetirizine (Zirtek) or loratadine (Claritin).

Atazanavir can cause a mild rash during the first two months in 10% of people but this disappears without additional treatment within a few weeks.

Emtricitabine studies reported rash on the palms of the hands or feet in up to 10% of African Americans, but these have been reported less frequently since the drug was licensed.

Although antihistamines are available over the counter, it is important that you check with your doctor or pharmacist before taking them, as there can be interactions with HIV drugs.

A rash can also occur as a reaction from exposure to the sun, and will normally resolve. Any rash that makes you feel sick might not be a side effect but a symptom of an underlying disease (such as scabies).

Nevirapine is linked to two different types of rash. One is the hypersensitivity-type reaction, probably linked to genetic risk factors.

The second is a rash that is related to liver toxicity, and this is more likely to be cause by an immune-related problem, and from starting nevirapine at a high CD4 count. See liver toxicity.

Things that can help

Up to 20% of people using nevirapine, efavirenz or etravirine, can experience a mild to moderate rash in the first weeks of treatment.

For most people this disappears over the next few weeks and they experience no further side effects. Less than 5% of people stop an NNRTI because of rash, and less than 1% people (0.1–0.5%) get a severe (grade 4) rash.

Nevirapine is no longer used for starting treatment in the UK but it might occasionally be used as a switch treatment.

If you get a rash with an NNRTI, you should make sure your doctor checks this carefully.

Anything more than a mild rash might require stopping the NNRTI – but only on the advice of your doctor.

More serious rash (0.3% with nevirapine, 0.1% with efavirenz, less than 0.1% with etravirine) can be life-threatening.

Stevens-Johnson Syndrome (SJS) is a severe hypersensitivity rash and stopping treatment is essential. This is why a rash needs to be seen by a doctor.

A rash can sometimes be one of the symptoms of the hypersensitivity reaction associated with abacavir (also in Ziagen, Kivexa and Trizivir) that occurs in 4-5% of people using abacavir.

It is essential that you see your doctor if a rash appears when using abacavir in a combination.