HIV in the UK 2014: Public Health England report on incidence and care 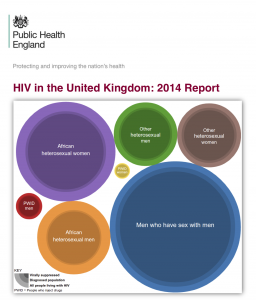 The latest Public Health England (PHE) report on HIV in the UK was published on 17th November 2014, based on data collected to the end of 2013. [1]

The 50-page report has 15 appendices of summary data tables showing HIV incidence, patterns of infection and HIV management outcomes, including breakdowns by age, gender, risk group and geographic location. The report also includes data on other STIs and tuberculosis.

The following key findings are highlighted from data related to UK figures for 2013.

Gay, bisexual and other MSM

• 90 new diagnosis were related to mother to child transmission, with the vast majority of cases occurring outside the UK.

These figures clearly show that HIV is far from ended in the UK, with more than 500 people diagnosed each month.

Current prevention programmes are particularly failing young gay men with 16% of MSM diagnoses last year (460 people) in men aged less than 24 years. This highlights the urgency of an early access programme for the option to use PrEP for those at highest risk.

It is unclear why uptake of RITA testing is still so under-used, given that this is paid for centrally, but expanding this to clinics that currently do not use the service would improve our understanding of recent infections.

Of the 90 MTCT transmissions, two thirds were in adults – virtually all born abroad and arrived in UK as adults, but reported as newly diagnosed in 2013 in the UK, with MTCT as likely mode of acquisition. Even among the 34 under 16 year-olds newly diagnosed in 2013, few were UK born and all but 2 were born prior to 2012. The actual MTCT rate in the UK is around 0.5% for women diagnosed prior to delivery. [4]

Although there are currently still no data on HIV rates in transgender communities, recent discussions between tansgender activists and PHE indicates that sexual health clinics will now be expected to collect gender data in non- binary categories. Hopefully, the long-standing lack of data for how HIV affects trangender people, might allow first data to be included in the 2015 report.

The PHE report also includes the importance of new approaches to HIV prevention, including calling for a more rapid access to PrEP. Bringing HIV testing to those people currently unaware of their HIV status and routine testing for those at highest risk are clearly critical stages in the UK cascade. Without this, benefits from both TasP and PrEP are unlikely to dent the ongoing incidence.

2015 needs to be branded as “HIV testing year”. Opt-out HIV testing in sexual health clinics is one key recommendation in the report that could help. Having had a recent HIV test needs to become a social norm, especially across all the highest incidence communities.

The UK is fortunate to still have one of the most comprehensive and careful surveillance programmes: this report is essential for the breadth of data and analysis that it contains. However, a few relatively small points from this otherwise excellent service might be useful feedback for 2015.

Firstly, although the report includes page of “PHE messages” apparently aimed at a general reader, this is the least useful section. It is good to include a non-technical summary but this needs to be more appropriately considered. Advice to “avoid overlapping relationships” is unlikely to lead to significant behavioural change.

Secondly, the use of the term “unprotected sex” is outdated and needs to be replaced by language specifying when this means not using a condom, given the prevention benefits of TasP and PreP.

Thirdly, most pages on the PHE website look and feel more like the prison service or tax office. Even if the HPA has gone, a little colour, warmth and a few graphics would help – given that these cost nothing.