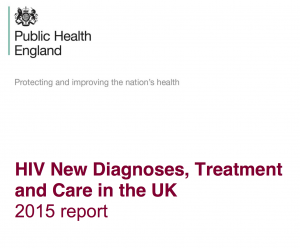 The 2015 report from Public Health England (PHE) on new HIV diagnosis, together with treatment and care based on data from 2014 was published in October.

As with previous years the report provided sober reading.

Key findings from the 2014 data include:

The results show a failure for HIV prevention programmes – even though absolute increases in diagnoses are small and might reflect increased uptake of testing rather than new infections.

We should expect effective programmes to be reducing HIV rates, especially given the wider use of earlier ART and some availability of PrEP (in the PROUD study and perhaps even off-label use).

Given the proven clinical and prevention benefits of earlier treatment, it is unacceptable that commissioners insist that ART is currently only commissioned for treatment at a CD4 count <350 cells/mm3, and that the timeline for this policy to be changed will not be until 2018.

In the meantime, this anomally can be easily overcome by prescribing ART to reduce the risk of HIV transmission – which is commissioned irrespective of CD4 count.