Dual therapy can reduce TB prophylaxis from nine months to one: fewer side effects and more people complete treatment

New results from a large international study using a simplified approach to prevent TB have the potential to dramatically improve outcomes for HIV positive people, cutting prophylaxis from nine months to one.

The BRIEF-TB study randomised 3000 adults with either latent TB or at high risk of TB infection to either one month of daily isoniazid (H) 300 mg plus rifapentine (P) 450 – 600 mg or to the standard of care nine-month regimen with daily isoniazid 300 mg.

The study included three years follow-up with primary endpoints of incidence rates (IR) of active TB, TB death or death by unknown cause, and stratified participants by ART use. 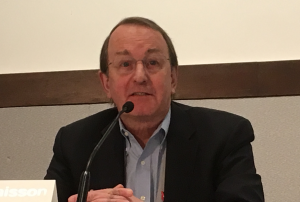 This was a non-inferiority study with lower margin of 1.25/100 patient years, based on an assumed IR of 2.0/100 PY in the nine-month arm. Results were presented by Richard Chaisson from Johns Hopkins University.

After three years of follow-up, there was no significant difference in the rate of primary events: in 34 vs 35 participants in the one vs nine month arms respectively. TB incidence rates were 0.69 vs 0.72/100 person years respectively (difference –0.025, upper 95% CI: 0.31).

Rates were higher for participants not on ART at entry and those with a positive TST/IGRA, but with no difference between treatment arms. Higher incidence in the one-month arm with baseline CD4 count <250 cells/mm3 was not statistically significant (p=0.12). See Table 1.

The researchers concluded that once daily izoniazid plus rifampentine was non-inferior to nine-months izoniazid, with fewer side events, and higher completion rates.

The effectiveness of current TB prophylaxis for people with HIV is limited by the difficulties of taking nine months of isoniazid – despite their dramatically higher need for this protection.

These results are likely to change management of HIV in people with latent TB or in high TB incidence settings.