What is an average? 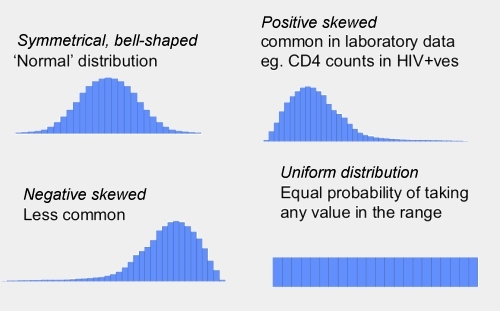 Study results are nearly always based on finding a pattern from lots of individual observations. In order to see any trend, the average of these observations is presented in the study report.

The average can be used to be able to generalise results for larger groups of people or larger sets of results.

You always need to remember when looking at average results that some results will have been higher and lower than the average. This is especially important when looking at studies related to healthcare.

The two most common ways used ways to calculated the average can give very different results.

This is where all the results are added together, and then divided by the number of results to find the average.

So, CD4 increases after 6 months’ treatment in 10 people could be:

Most people had increase but some peoples count was lower after 6 months.

This is where the results are all arranged in numerical order and the middle of the range is taken as the average.

So, CD4 increases after 6 months treatment in the same 10 people would be:

The median CD4 increase would be the middle point – half way between the 5th and 6th result:

The median for this sample is +35.

Even distribution is a term to describe data where most results are in the middle and a roughly similar number of results fall either side. It is also called a bell-shaped or ‘normal’ distribution . If results are evenly distributed then the mean average should be used

When the results are unevenly distributed this is called a skewed distribution. For example the majority of results may be higher or lower than the middle range and skewed to the right (negative skewed, less common) or the left (positive skewed, common in lab data). In these cases it is important to use the median average.

You can see that completely different patterns of results give you the same mean average.

Different ways to show variation are used depending on whether the results are evenly or unevenly distributed.

If distribution is even and you are using the mean average, then variation is usually calculated as being twice the standard deviation – and shown in brackets with a +/- sign in front of the result.

If distribution is uneven – like the example of CD4 counts earlier – and you are using the median average, variation is easier to understand and shown in two main ways:

1. Showing the lowest and the highest results (the range of results):

2. Using the middle half of the results (called the Inter Quartile Range or IQR):

This is the range of the middle 50% of result with the highest 25% and lowest 25% not included.

The Inter-Quartile Range is sometimes given instead of the full range to reduce the impact of very high or very low results.