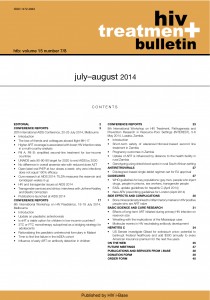 This bumper summer issue of HTB covers conference reports from AIDS2014 and the Paediatric Workshop held in Melbourne in July. We also report from the INTEREST meeting held in Lusaka in May.

Both Melbourne meetings were overshadowed by the shocking news of the delegates who died on flight MH17 – many presentations included tributes to these colleagues and friends.

In ten reports from AIDS 2014 we include studies on Treatment as Prevention (TasP); results from open-label oral PrEP and use of lower dose AZT. We include an overview of cure research (see further cure reports later in this issue, including on the Mississippi child) and review studies related to transgender issues and HIV.

Summaries from the paediatric workshop include: an update on paediatric ARV development; use of d4T in children; that 3TC (or FTC) monotherapy is suboptimal as a bridging strategy for adolescents; the advantages of a rationalised paediatric antiretroviral formulary in Malawi; time to first-line failure in the IeDEA cohort and the sometimes confusing influence of early ART on antibody detection in children.

INTEREST reports include reassuring Zambian data both on short-term safety of atazanavir/ritonavir-based second line treatment and on pregnancy outcomes for women receiving ART; unsurprisingly one study showed that uptake of ART is influenced by distance to the health facility in a rural setting; and genotyping using dried blood spots was feasible in a rural South African setting.

Other news questions UK access to dolutegravir and the soon-to-follow single-tablet regimen. Have you commented yet?

New guidelines include those from WHO for key populations: gay men, people who inject drugs, people in prisons, sex workers and transgender people; and EASL guidelines for hepatitis C.  New ARV prescribing guidelines for London are now released – and, so far, only apparently available on the i-Base website.

Gareth Hardy reports on whether changes in bone mineral density are related to immune activation and with Richard Jefferys covers basic science and vaccine research.

And finally we report on a US Senate investigation of Gilead for the sofosbuvir price that has the potential to bankrupt Federal healthcare and add $300 annually to every American insurance premium for the next five years.