Four reasons IAS 2015 will be a milestone HIV conference: a personal view 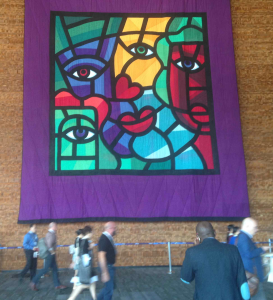 The banner from the IAS meeting in 1996 was an reminder at IAS 2015 of the important part Vancouver played in the history of HIV treatment.

IAS 2015 will be a milestone conference that changes the way adult HIV is approached globally.

Results from antiretroviral treatment (ART), prevention and programmatic studies naturally dovetailed to provide a new evidence base for rethinking historical approaches to HIV management in order to reduce transmissions, extend life and ultimately produce a cure.

The significance is appropriate given that in 1996, when the IAS conference was last held in Vancouver, it heralded the modern ART era. Within a week of the conference, tens of thousands of HIV positive people started HIV treatment in the US. [1, 2]

Long-term activists, doctors and researchers who had attended that meeting in 1996 often referred to this poignant history. The remarkable changes over the last 20 years have covered both scientific advances and political will to ensure over 15 million people globally take ART.

This year, the new data at IAS 2015 was so important that it has already changed WHO guidelines to recommend universal treatment for all HIV positive people and changed the timeline for the guidelines, with this key recommendation being announced months ahead of schedule. [3]

The WHO changes were largely due to the international START study whose results overturn twenty years of believing that high CD4 counts provide a safety barrier against HIV-related illnesses. While earlier CD4 thresholds were arbitrary – whether at 200, 350 or 500 – the START results showed that ART reduces the risk of serious complications at CD4 count well above 500 cells/mm3. START showed that it is safer to be on treatment than not being on treatment. It also showed that earlier ART is safe and effective, with a remarkable 97-98% having undetectable viral loads 12 months after starting. [4]

Other important studies at the conference contribute in other ways to a move to routinely treating HIV on diagnosis.

Longer-term follow-up from the HPTN-052 study reported that the dramatic reductions in HIV transmission from the first year of ART were sustained out to five years. [5]

The importance of Treatment as Prevention (TasP) was a major drive behind some treatment guidelines already recommending ART at CD4 counts >500 cells/mm3. Taken with START results, the overlapping benefits of treatment and prevention support the WHO recommendation that all HIV positive people should have the option to start treatment. [5]

Other prevention studies added to earlier evidence on the potential for oral PrEP to play a more significant role in reducing HIV transmission than from current limited use. Francois Venter made this point very effectively during a refreshingly direct plenary talk. He also stressed how significantly real life PrEP demonstration studies have out-performed the original registrational studies. [6] This talk is one of many webcasts from IAS 2015 that is recommended viewing.

PrEP was elevated to a major theme throughout IAS 2015 – with more than a dozen talks and oral presentations in the main programme, and at least another 20 posters.

Many studies reported that PrEP did not lead people to increase risky behaviour and others showed that those at highest risk were often the most adherent. Most people clearly try hard to remain HIV negative but that they need more options than just condoms to do this.

Other studies compared dosing strategies for PrEP, which has a critical association with access and effectiveness. It is also difficult because traditional approaches to measuring adherence – particularly counting pills taken – have little relevance for PrEP unless: (1) someone actually is a risk of HIV infection, and (2) that protective drug levels are reached when these risks occur. Several presentations from the HPTN 067 ADAPT study showed that, as with treatment, the choice of different ways to use PrEP will be important when individualising care. [7, 8, 9]

Cure research was a fourth main theme at IAS 2015 with consensus that an HIV cure – whether eradication or remission – will require multiple approaches. [10, 11]

Headline news was also made for a new case of post treatment control for a French teenager who had used ART for almost 6 years after birth but has remained off ART for 12 years with sustained undetectable viral load, without ART. [12]

Many studies looked at strategies to overcome HIV latency, principally in resting CD4 cells. This includes: activating these cells (the “shock” in “shock and kill”), gene therapy to manage HIV without ART, and a new approach that instead aims to maintain latency. [13, 14, 15]

In the context of cure research, the smaller this reservoir the easier HIV might be to cure. Using earlier ART to restrict the size of the reservoir was discussed in many sessions as a way to produce the optimal setting for an HIV cure. [16]

In one of the last sessions of the conference, Christopher Pilcher from University of California San Francisco outlined results from a demonstration project in San Francisco that dramatically cuts time to starting ART. This model included rapid referral to an HIV clinic with the option to start ART very shortly after diagnosis including on the same day. This approach had high success rate as part of a public health clinic in San Francisco with a complex patient group (25% homeless and 100% without health insurance). [17]

Same day ART is also the model for the Option B+ programme to reduce mother to child transmission and this WHO recomendation has already been implemented by more than 65% of low- and middle-income countires. [18] However, the context of same day ART and how it is provided is critical . In one Option B+ programme, HIV positive women diagnosed during pregnancy and given same day ART at the testing centre reported greater loss to follow up (LTFU) – 22% vs 8% – compared to women referred to a different treatment clinic. [19]

A more sobering study supporting importance of early ART in order to reduce LTFU was presented in a poster on more than 137,000 people enrolled in 41 Médecins Sans Frontières (MSF) programmes. [20]

This suggests that how ART is started in each setting might be more important than timing of same-day ART and was emphasised in the San Francisco study, where current elements of the sequential care pathway were not discarded, but rather the extended systems of delays were removed.

Some UK clinics already have a similar approach to ART, notably those who treat people diagnosed during primary infection. Making these benefits to become more widely available will depend on how doctors, activists and health systems respond to the wealth of new data presented at IAS 2015.

A poster on the views of UK doctors to treatment during primary HIV infection is important for highlighting that this is a key issue for newly diagnosed people living in the UK. [21]