This impressive technology reported high potential to customise and individualise IVR using a small-scale fast printer that can also be used for cost-effective population-based production. This will provide greater options, faster production and lower costs compared to one size fits all injection-molded rings.

The process uses a technology called Continuous Liquid Interface Production (CLIP) of 3D objects developed by Carbon 3D Inc. that allows control of drug release from various sizes. Currently one use for the technology is to individualise Adidas running shoes. [2] 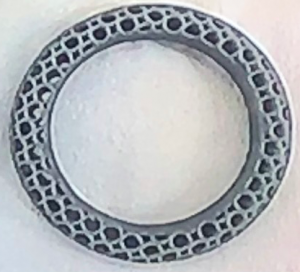 Rings are printed vertically in batches that produce 12 rings in a three-hour cycle – taking approximately 15 minutes each. The printer is not just for prototyping but the same machines would be used for scale-up production. The technology can also combine different resins – for example using both a hydrophobic and hydrophilic resin for different active compounds.

Computer aided designs (CAD) is used to develop the intricate ring structures which can fine tune drug release kinetics, allowing delivery of nearly all the active drug. Changing the size of each unit cell changes the dynamics of drug release, which can be corrected to the surface area of each ring. This leads to algorithms for release kinetics of each drug.

CAD design allows rings to be made in different shapes, colours and sizes, each with different mechanical properties.

IVRs have so far been tested in mice (approximately 3 mm diameter) where they were surgically implanted in mice to hold them in place that provided good safety data over 60 days. No local or systematic inflammation was seen, with no changes in the vaginal microbiome.

Current plans are looking at production of rings to prevent STIs, pregnancy and HIV transmission.

Although the slides from this session are not included in the webcast, an audio recording is available..