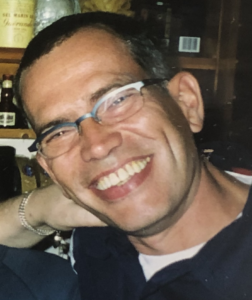 It is with deep sadness that we report that UK community activist Paul Decle, also a dear friend and collaborator, died in the early hours of 27 April 2021, from complications related to Motor Neurone Disease (MND).

For over 20 years, Paul worked with numerous community organisations and HIV projects where he was a popular member of any team and he will be deeply missed.

In the late 1990s, he was an active member of the steering committee of AIDS Treatment Project and was one of the core group that founded HIV i-Base in April 2000. He used his technical expertise to develop websites for many organisations (including i-Base) where for many years he managed the geeky aspects of technology that still remain a mystery to the rest of us: starting at 4 am to keep an afternoon free to catch sun.

At i-Base, Paul also played a key role in developing and running the UK-Community Advisory Board (UK-CAB) when it was first set up. He used this experience for his future independent projects, particularly to develop and nurture a new network of patient forums linking many of the larger HIV clinics. For several years he was employed developing peer services at the Chelsea and Westminster hospital.

More recently, Paul was both a Trustee and Chair of the national peer support organisation Positively UK. Silvia Petretti, the current Chief Executive, said: “Paul was a fervent believer in the power of peer support, with an impeccable dress sense and wicked sense of humour. He had a very kind and open hearted way to approach everyone here. He was also generous and caring. When I was developing the PozFem Positive Women Network,  Paul approached us, unsolicited, offering to develop the PozFem website, and did it all free.”

Paul was also an experienced and talented gardener.  During the late 1980s he designed and planted the outside courtyard and garden of the Landmark HIV Centre in Brixton. And in 2019 he brought all these skills to a new and innovative project to combat stigma, isolation and mental health issues experienced by people living with HIV. In partnership with the Courtyard Clinic at St George’s Hospital, he set up a gardening club to develop HIV peer support in an informal setting. Bringing ornamental (and edible) plants to forgotten tarmac this project also grew a wild meadow while helping with physical and emotional well-being – for both patients and staff. This was awarded well-deserved funding from the National Lottery.

All this was despite personal health difficulties that became progressively worse over the last three years. Although he was eventually diagnosed with MND, this probably explained other symptoms he had been managing for much longer.

Paul tackled the impossible challenge of MND with remarkable strength and courage. And also with openness – posting to the UK-CAB forum early last year about his diagnosis in order to support others with a terminal illness.

Paul was a remarkably gentle person and could encourage the best out of everyone. But he also welcomed the challenge in difficult situations if he needed to stand up for important principles. I was always grateful to have his support as a colleague for so many years.

Paul was also one of those people who could laugh at the complexity of life. As someone with a sturdy collection of DMs and proud history of living in squats, he could have just as much fun turning heads in the latest and sharpest suit from Prada.

Reactions to his death were immediate. Dr Laura Waters, Chair of BHIVA wrote: “He was nothing short of legendary and a voice I respected hugely”. Marc Thompson, cofounder of Prepster and BlackandGayBackIntheDay wrote: “I will always remember how Paul could go from the deadly serious to that little boy giggle. And no-one rocked a sharp suit and DMs like him. He was an amazing member of the HIV family, he will be missed”.

Our thoughts are with Paul’s family and friends at this difficult time. They are especially with his husband and life partner Christian – they were inseparable for more than 30 years.

These links to posts in Christian’s Facebook include many personal tributes.
Celebration held in Battersea Park in tribute to Paul’s life.
Plans for the celebration and messages from friends.
Early post with tributes and photographs.

This article was first published on 28 April 2021.