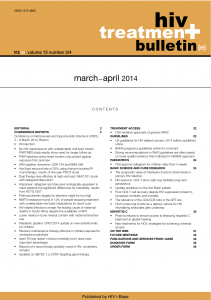 This new issue of HTB is now online.

This issue of HTB includes reports from three important conferences:  the European Association for the Study of Liver (EASL) held in London, BHIVA/BASHH in Liverpool and our final reports from CROI 2014.

The news on hepatitis C includes a review of the most advanced pipeline drugs, new treatment guidelines from EASL and WHO and an activist response to the unacceptably high price – especially for sofosbuvir (“So-Valdi, So-Expensive”).

Our reports from BHIVA include a look at recent UK seroconverter data showing that three quarters of HIV positive people start treatment within two years of infection, an expanded analysis from the PIVOT PI-monotherapy study, HCV issues for the UK (diagnostics and testing and sexual transmission) and HIV positive attitudes to organ transplants from positive donors.

Reports from CROI 2014 include pharmacokinetics of antiretrovirals in pregnancy, superior virological outcomes with efavirenz compared to lopinavir/r in Ugandan pregnant women, and some of the issues associated with starting ART in infants soon after they are born.

And Richard Jefferys provides an excellent catch up with pathogenesis and cure research presented at CROI 2014, including a caution that ART may have benefits for long term slow progressors.

Other news is a large study reports no increase in death rate in HIV positive people with renal dysfunction receiving tenofovir in Zambia.