This graphic is a ‘map’ that simplifies the genetic structure of HIV into nine main genes: gag, pol, vif, vpr, vpu, env, tat, rev and nef.

The map shows roughly how these genes are laid out in HIV-1.

Each gene has a different role in the HIV life cycle. You don’t need to learn all these functions, just recognise that we know roughly what many of the functions are. For example env is easiest to remember because it is the recipe for spikey proteins that stick out from the ‘envelope’ coating on the outside of the virus.

Pol is important when talking about drug resistance. This is because this section of the HIV genome that has the code for the enzymes that are targetted by many HIV drugs. These include protease inhibitors (PIs), reverse transcriptase inhibitors (nukes and non-nukes) and integrase inhibitors. 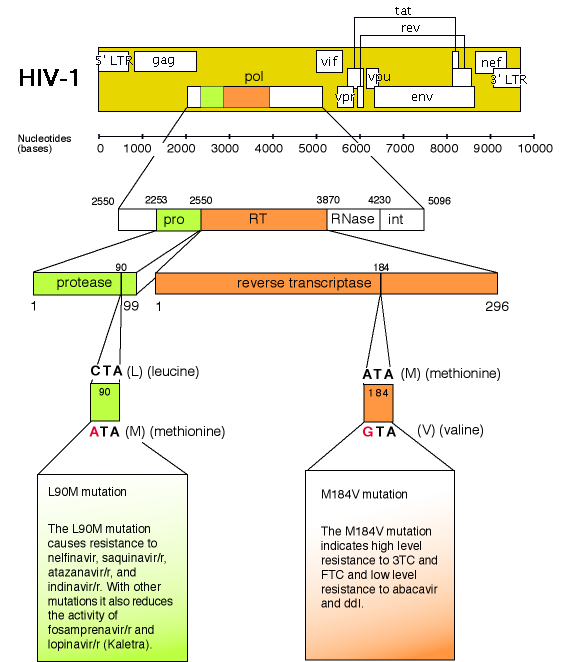 The numbers underneath the main picture relate to the 9700 bases (roughly 3,200 amino acids) that make up the genetic structure of HIV. Pol starts at number 2550 and stretches to 5096.

The protease section in pol stretches from 2253 to 2550. This is a chain of 297 nucleotides, which equals 99 amino acids (amino acids are groups of three nucleotides).

Therefore, the protease gene is numbered from 1 to 99. The example here is L90M which is a common PI mutation.

In a similar way the amino acids in reverse transcriptase are numbered from 1 to 296. A change at position 184 on the RT gene from ATA to GTA is the M184V mutation.

This diagram is based on a more detailed map of the HIV-1, HIV-2, and SIV genomes, available at:

For an explanation of what these different genes do see the i-Base FAQ:

If you feel really geeky, then check it out, but while learning about resistance just to let the rest of the information in this section sink in first.