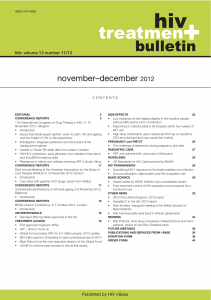 This new issue of HTB is now online and includes reports from seven conferences if we include the launch meeting of the British Society of Nanomedicine, and a community debate at the First Southern African Clinician’s Society meeting.

Reports from the Glasgow congress cover important aspects of HIV care that still divides expert opinion: when to start ART?, HIV and ageing, and the impact of HIV on life expectancy. Plus new results on dolutegravir and Quad.

We are also fortunate to be able to include a comprehensive report from the recent US Liver Meeting (AASLD), hinting at the dramatic promise for HCV treatment and eradication,  including early data in HIV/HCV coinfection. Tracy Swan’s expertise picks through these complex results to separate the hope from the hype.

This issues treatment access news includes the ongoing concern about continued use of d4T globally. Though further evidence shouldn’t be needed we review a South African study, stopped for safety reasons, that reported mitochondrial damage within four weeks of starting d4T.

More optimisitcally, a paper we review, from the D:A:D group, reports that liver-related mortality (in countries that have dropped d4T) is overwhelmingly linked to confection with hepatitis B and/or C, rather than toxicity of ART.

We also highlight the new BHIVA standards for HIV Care, produced with extensive collaborations, that hope to set the minimum framework for commissioning HIV services and care. The standards were launched to coincide with World AIDS Day, together with latest HPA reports on both HIV in the UK and HCV in the UK, and all are available now online.

Over the years i-Base has been lucky to work with a dynamic network of other HIV organisations. i-Base encourages translations and collaborations and at the end of the year it is good to see that HTB is now produced in three similar editions: “HTB South” (in southern Africa), “HIV Tedavi Büleni” (in Turkey) and most recently, “HIV Bilten” (for the West Balkans). These collaborations, lead by HIV organisations in these regions,  are in parallel to translations of the i-Base treatment guides (over 25 languages are available online).

With this in mind, we would like to thank all our readers, colleagues, collaborators,  contributors and supporters from 2012 and wish everyone best seasonal greetings for a happy, prosperous and successful 2013.