Resistance 3: Mutations with and without drugs

The previous section set the stage:

Section 3 looks at how HIV mutations behave when HIV drugs are around (i.e. in the presence of drugs).

In someone not on treatment, mutations that develop that can affect how a drug works are made at random.

When no drug resistant mutations are present, this HIV is called ‘wild type’.

When not on treatment, drug resistant HIV has no advantage over the wild type. It is less fit and so wild type continues to be dominant. The muation may still be in the pool of viruses but it will stay a minority.

Now think about how the pool of viruses will change if you start taking this drug.

Before taking treatment the resistant HIV had no advantage over wild-type. Now, it is stronger than the other viruses. See Figure 2.

This major concept is called ‘survival of the fittest’. 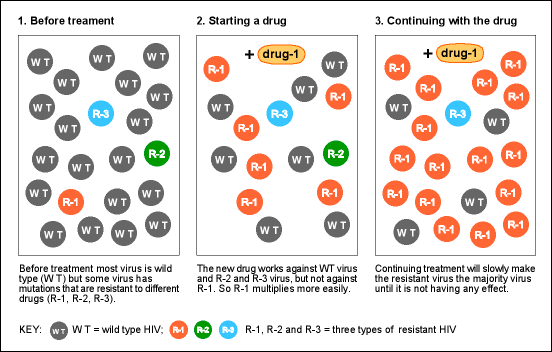 3.4 Survival of the fittest

‘Survival of the fittest’ is central to the concept of evolution.

Whether talking about how life developed from tiny organisms into plants, fish, birds, animals and humans, or how a virus changes, life evolves. It has taken millions of years for humans to evolve, but HIV does this in days.

Each generation evolves and adapts in relation to the surrounding environment.

This is the same for HIV. The virus evolves and when the environment changes this affects how HIV evolves. By taking treatment, the environment for the virus changes because the virus is now in the presence of drugs.

This idea is sometimes explained another way. Treatment is referred to as exerting a selective pressure on the virus to change.

Sections 3.1 to 3.4 involved important ideas. Take a break. Let these ideas sink in.

These ideas will be the foundations for the next sections, which should be easier. Take time to recap the following key points.

Key point 1: HIV drugs do not initially cause resistance. Mutations occur because the virus makes mistakes. However, a drug exerts selective pressure for resistance to develop and expand.

Although the first mutations occur by chance, often before treatment, if the virus continues to replicate in the presence of a drug, this can now generate new and more complicated patterns of resistant mutations.

The second and third mutations would not be likely to occur naturally if the treatment wasn’t present. This means that if you stay on a failing treatment then more complicated mutations can occur.

Key point 2: is that selective pressure of drugs can work in two ways.

If you stop or switch treatment then the drug pressure is taken away. This will reduce the amount of resistant virus in the pool. Without the drug, the resistant HIV no longer has a relative advantage over wild type.

Question: Does drug resistance disappear when you stop taking a drug?

Answer: No. Drug resistant HIV becomes a minority in the pool (see Figure 3) and is archived in CD4 cells that are sleeping. Sometimes this can happen within weeks and sometimes it might take years.The resistant HIV then becomes too difficult to detect with a standard resistance test. Also see Section 5: When to use resistance tests.

Figure 3: Resistance reduces if treatment is stopped but it remains at low levels 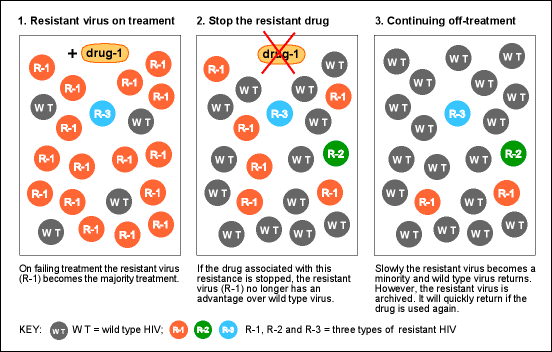 Key point 3: A resistance test only tells you about resistance to the drugs that were being taken when the blood sample was taken. When looking for transmitted drug resistance, the sample closest to the time of infection is most likely to still see resistance.

This point is important when advocating for resistance testing.

If you are infected with drug resistant HIV, this will initially be your dominant strain. Over time, some mutations become a minority at a level that is too low to be detected. Even though the majority population may become wild type HIV, drug resistance will still be present. This is called ‘archived resistance’.

Key point 4: Drug resistant HIV can be transmitted in the same ways as wild type HIV. This includes sexually, through shared injecting equipment, from needle-stick injuries and from mother to baby. HIV positive people can be reinfected with a different drug resistant strain.

Many cases of re-infection are only detected because the new infection was with drug-resistant HIV.

Question: What happens if someone was infected with HIV that was drug resistant and starts treatment that includes one of those drugs?

Answer: If they are using a combination with three drugs, then only two of those drugs will be fully active. This increases the risk that the combination may not be strong enough. It will be more difficult to get an undetectable viral load and resistance to the other drugs can develop.

The example in Figure 2 shows that using a single drug provides pressure for pre-existing resistance to become dominant.

This is one reason why combination therapy uses three drugs. See Figure 4.

Single mutations are all present when starting treatment. Some dual resistant mutations may be present on a few viruses. But triple resistance will not be present on the same viruses. Even with HIV being such a rapid and prolific virus, this is very unlikely. Even if R-1 and R-2 have developed on the same virus (dual resistance) then D-3 will still be active against this virus.

D-1, D-2 and D-3 will also all be active against wild-type HIV, which is hopefully the majority population.

Your answers are anonymous, but the course is dependent on your feedback, which is appreciated.