This previous section looked at when to use resistance tests.

We referred to the UK treatment guidelines, though other guidelines for countries with access to resistance tests are similar. Even in the UK these tests are not always provided, so this becomes an advocacy issue.

The reason for testing at each time is included in Table 3 in section 5.

9.6.2 Introduction to this section

This section looks at some research studies. These provide examples of the ideas discussed in earlier sections.

They show some of the ways that research changed how we understand the way HIV acts. They also show how new information led to changes in guidelines and in the way that HIV positive people are treated.

A good study to show how resistance to a drug develops in a person (rather than in theory or in a test tube) comes from early studies of the first HIV drugs.

This is the perfect way to get resistance! You have a high viral load and take a treatment that is not strong enough to reduce viral load to undetectable.

This was early research. Using only one or two drugs is not recommended now, other than in some circumstances with a boosted protease inhibitor.

This early AZT dose involved taking 200 mg every 8 hours (ie three times a day). Placebo pills were used in the monotherapy groups so everyone in the study was taking the same number of pills.

CD4 and viral load results were recorded for one year (see Figure 6). Figure 6 shows the impact of resistance when only one or two nucleosides are active. Within two weeks viral load dropped in all groups. But then with 3TC monotherapy viral load rebounded by week four and rebounded in the other groups by week eight).

In section 3 we talked about HIV not being able to ‘proofread’ to check for changes in newly produced virus.

This results in someone having a vast mixture of slightly different viruses before they start treatment.

This example is included to show the benefit of treatment driving viral load to undetectable. [1]

Lisa Frenkel is an American paediatrician who led a team that looked at viral load in 37 children who generally had undetectable viral loads on treatment. About 60% of children (21 out of 37) also had low-level blips (from 50 to 400 copies/mL) on treatment.

The group looked at the virus present during the blips and compared this to the sample before treatment (using a phylogenetic test). In 8 out of 11 children the virus was exactly the same. The only evidence of virus development was in two children whose viral load had blipped many times.

This was one of the first studies to show that ongoing replication effectively stops when on treatment. Some of these children had been on treatment for several years and their HIV was exactly the same as when they started treatment. This research supported the theory that treatment is usually as potent as it can be. Adding more drugs does not reduce viral load any further. This has been demonstrated in several later intensification studies. [2]

This is extremely important.

The HIV produced in most people with an undetectable viral load seems to come from resting or latent CD4 cells that went to sleep before treatment was started, and are periodically waking. These long-lived cells (some sleep for more than 60 years) are referred to as the viral reservoir. This has led to other researchers trying to find a way to target the resting CD4 cells. If this can be done there is the chance to cure HIV.

In section 3.5 we included the first reference to the fact that resistant HIV can be transmitted.

Lots of research groups keep databases of every resistance test in a country. They can then look at trends in transmitted drug resistance each year.

This study, from the UK HIV drug resistance database (UK-HDRD), is available online.

The group tracks and reports the results of resitance testing each year and shows how this changes over time.

The study reported trends in resistance over time and differences between newly diagnosed people and people with drug resistance.

This is only one of many studies produced by the group,

Figure 7. Percentage of tests showing drug resistance by drug class in the UK 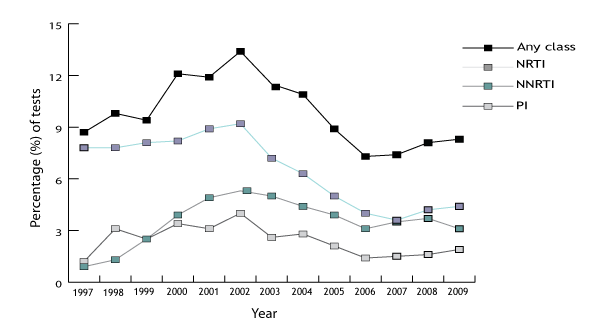 Publications and presentations from the UK HDRD:

In section 4.3 we looked at how some mutations develop easily and that for some drugs and drug classes resistance develops easily – in this example NNRTIs.

Nevirapine is an NNRTI and key mutations – Y181C and K103N – only need one base change to develop. Once there, they are like an on/off switch: the NNRTI stops having any impact on the viral load.

Nevirapine is good at getting nearly everywhere in your body very quickly. When a single dose of nevirapine was given to HIV-positive pregnant women just before labour (giving birth) it dramatically reduced the chance of passing HIV to the baby. From 25% down to 12% with a single dose. Previously, AZT needed to be taken twice-daily for several months to have the same impact on reducing transmission to the baby.

For women in countries with no access to treatment this was potentially very exciting. However, other researchers were cautious about the risk of resistance for the mother. Using only a single dose of a drug meant that the nevirapine was not supported by any other drugs. Viral load was still likely to be high, and nevirapine also takes several weeks to leave the body. This left a long time for HIV to develop NNRTI mutations by chance. They develop and reproduce because they are more fit when nevirapine is still there.

In an important single-dose nevirapine study (called HIVNET 012), the researchers first tested for resistance six months after the women used nevirapine, and reported that resistance was only seen in 20% of women (which was still very high). Resistance experts were more concerned. In section 3.5 we learnt that resistance that develops when a drug is present usually becomes difficult to find when the drug is stopped. Some researchers talk about resistance ‘fading’ but this is a confusing term because we know that when someone restarts treatment that resistance quickly comes back. It is nearly always archived.

When the researchers went back and tested earlier samples – this time only two weeks after the women had used nevirapine – they found over 75% of mothers had nevirapine mutations.

This study is interesting because it shows the importance of resistance testing before starting ART.

It included about 300 people who were treated during primary HIV infection (within 6 months of infection).

Resistance testing was not used before starting treatment to choose drugs. However, 35 people were found to have resistance when their pre-ART (baseline) samples were later tested. Of these 35 people, 21 had resistance to one drug, 10 to two drugs and 4 people had resistance to all three drugs in their combination.

The resistance group had a significantly poorer response to treatment. Only 16% had undetectable viral load after three months compared to 40% of people with no resistance. After six months the difference was still significant: 57% vs 79%, even after allowing for age, gender and differences in CD4 count and viral load at baseline.

This study and similar others were used as evidence to support the recommendation to provide resistance testing before starting treatment in treatment guidelines.

This example is a report on reinfection from an important conference in 2010.

These were certainly not the first studies to report reinfection (sometimes called superinfection) but it is a report of four different studies that each involved interesting cases.

Table 3 in Section 5.3 includes testing for resistance in anyone whose viral load rebounds on treatment. It specifically mentions the circumstance for someone on stable treatment but who may have been reinfected with a different strain of HIV. One of the studies included a couple where both partners were HIV-positive and did not use condoms. However, one of the partners has no resistance and an undetectable viral load. The other had triple-class resistance and a generally detectable viral load.

In this case the partner with no resistance became infected with the resistant HIV. The initial viral load rebound prompted the doctor to test for resistance and to compare the results to earlier samples.

This case is important because it occurred in someone who had been HIV positive for many years (ie not in early infection). It also had a dramatic clinical impact – the person’s previously active treatment stopped working.

A second study reported a case of reinfection in someone who was a long term slow progressor: they were stable off treatment for many years with a strong CD4 count. After reinfection with a second strain (both strains were HIV sub-type B), viral load increased and CD4 count dropped, requiring earlier need to start treatment.

The third and fourth studies looked at dual infection (rather than reinfection) to see what happens in a person with two different infections. Some of these cases include reinfection with different sub-types.

In some people one virus out grows the other and becomes the dominant virus. In others, the different viruses combine to form a new hybrid.

Your answers are anonymous, but the course is dependent on your feedback, which is appreciated.