NOTE: for updated information on expected vaccine efficacy after one compared to two doses and the possible impact of HIV please see: How good is the monkeypox vaccine? 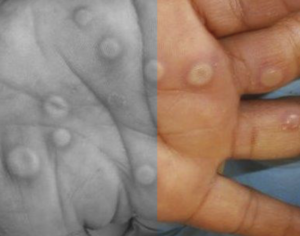 Since 16 May when seven cases of monkeypox (MPX) had been reported, numbers in the UK have approximately doubled every week and by 1 July more than 1075 people had been diagnosed. [1]

MPX is no longer a novel concern that can be absorbed into the work of sexual health clinics and handled by contact tracing.

MPX quickly developed into a health crisis in the UK, that mainly affects networks of gay and bisexual men. Although most cases were initially in London, MPX has now been reported across the UK.

Health policies underestimated the spread of MPX and are now following the crisis rather than leading an adequate response.

MPX is highly infectious in close contact. It is very easily transmitted during close physical contact, whether or not this is sexual.

So even though MPX is not primarily sexually transmitted, nearly all cases are in men who are gay, bisexual or who otherwise sleep with men. Unfortunately, our communities were unlucky in having some of the early cases.

It is important that many community organisations have been included in shaping the response to MPX and this has helped to limit stigma that might otherwise have been linked to the outbreak. Community projects are using their networks to provide information about risk.

But as the UK enters Pride week, the rapid expansion in MPX cases means that communities need direct information about risk. This should be more than advising people to watch out for spots and to wash their hands frequently, as this will have little impact on stopping the current outbreak.

Instead, the clearest and most direct advice for an individual to avoid MPX during Pride week is to not have sex in high-risk settings. And to not have sex with anyone who has had higher-risk sex.

Recent cases reported from Portugal included two important observations. Firstly, that some MPX spots can be difficult to differentiate from an insect bite. Secondly, that one case included a single internal ulcer in the rectum (that was only identified by proctoscopy due to local pain). This case should inform the discussion about the potential for MPX as an STI. [2]

And this strategy will probably work on a population level too. This information is provided knowing that any message to reduce sex will have limited acceptability. It is also possible that the suggestion will produce some less than supportive community responses. This is also an important part of the community response.

This is a short term suggestion – maybe for four weeks. This covers roughly once cycle (allowing one week from infection to symptoms and three weeks for recovery. Four weeks is long enough to limit the current spread and limit further overloading sexual health services. It is short enough to be socially acceptable as an emergency response.

This strategy includes not having sex in settings where connecting with multiple partners is easy, whether at private parties, saunas, darkrooms or cruising grounds. These settings generally have low light and limited other contact. Plus MPX can remain infectious on hard surfaces for weeks, and on soft materials, likely longer. [5]

Even with careful cleaning, sex-on-premises venues are likely to only be able to reduce risk. In situations where higher risk sex occurs, swapping contact details in case one of you later tests positive for MPX, might be an appreciative acknowledgment of respect.

An otherwise excellent webinar organised by the WHO last week on the implications of MPX for large festivals and other social and community gatherings planned for the summer, did not differentiate events like Glastonbury from Pride. [6]

As part of the wider information on MPX provided by community organisations, i-Base has posted two recent Q&A resources that include information about reducing risk in sexual settings for the upcoming Pride events. [7, 8]

One suggests that the safest way to avoid MPX is to limit sex for four weeks. The second explains why we are not saying not to have sex.

i-Base and the UK-CAB have produced an online factsheet that is currently being updated every couple of days. [9]