What are my choices for HIV drugs in Birmingham?

I was offered efavirenz (Sustiva) and (Kivexa). What do you think about this combination?

Because of the side effects of Sustiva (blood sugar and cholesterol) I’m not very happy to start this combination. I want to found out if I can have a single tablets regimen with less side effects. I don’t want to damage my body with those old medication they offered me. I found out people take this combination in 2012 and now it is 2018 I am sure there is new medication.

Please help me get the proper treatment with single tablet regimen in Birmingham. Can you suggest any clinic that they will be able to provide me with the right treatment.

Thanks for getting in touch and for including so many questions. I will answer each one separately so this will be a longer answer than usual :)

It is great that you are now going to start treatment (ART). Can I ask whether this was your choice to wait this long? This is because for the last few years most guidelines recommended starting treatment earlier.

Either way, there is a lot of choice for your treatment. Most combinations are pretty similar and pretty good. The differences are linked to individual responses to treatment and if you get side effects with one drug it is easy to change to another.

Drug choice – including older drugs and side effects

So the treatment your doctor has suggested is very good and it has been widely used for many years. This isn’t a concern because these are old drugs though. Many old drugs are still widely used and recommended – and will continue to be – irrespective of their cost.

However, efavirenz can have more side effects, but this is not so much for cholesterol and blood sugar, but on mood changes and difficulty sleeping. Here your concerns are valid. UK prescribing guidelines (from BHIVA) recommend using other drugs before efavirenz. But as for many people these side effects quickly get easier, the NHS commissioners still want people to at least try efavirenz first. Then, if side effects are either difficult or don’t get better, you can then change to a different combination. The NHS still wants people to try efavirenz because it enables a combination where all three active drugs are available as generics. This combination is one-third the cost of the next band of combinations. See the graphic below for a guide to the difference. 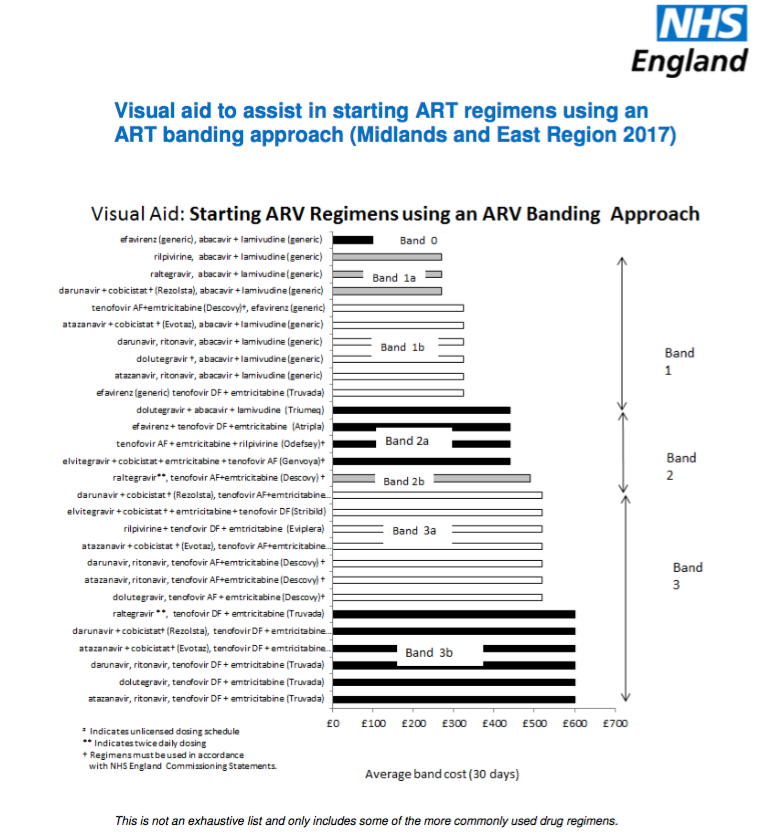 However, if you can not use efavirenz for clinical reasons, for example if you have anxiety or depression, or a history or these, or if you work shifts, or you are worried about the side effects, then you don’t even need to try efavirenz, but could maybe start, for example, with dolutegravir plus Kivexa or raltegravir plus Kivexa (or any other combination in Band 1).

This link includes more information about generic HIV meds and whether efavirenz is appropriate:
https://i-base.info/guides/starting/nhs-changes-and-generic-drugs

One pill vs two pill a day

Even though the effectiveness of many drugs is similarly high, you might need to take two pills a day rather than one. This is something that as an advocate I can’t guarantee because the whole of the NHS – not just HIV – is based on using generic drugs when they become available.

Unfortunately, the prices changes for some of the combinations in a single pill are much more than the separate parts. When most people understand the cost difference they usually accept that two pills is okay. If a pub charged £1 for a half pint and £6 for a pint. most people would drink half-pints all evening.

Even then, when the single pill is clinically important – perhaps where people have complex lives and who really struggle with adherence – the doctor can argue that the single pill is needed. This isn’t just for convenience though.

Although everyone worries about side effects, modern HIV drugs are actually very safe and effective. More than ten yeas ago, the SMART study showed that HIV positive people had a greater risk of kidney and liver problems if the were NOT on treatment – and this was all using older drugs.

It is not true that all HIV drugs affect your kidney function or liver function etc, even when this is how your body processes these drugs.

The main HIV drug linked to kidney damage is tenofovir DF and your doctor is not suggesting you use this. However, unless you already have kidney problems, tenofovir DF is still a very good and safe treatment for many people and it is still one of the most widely used HIV drugs.

A newer version called tenofovir alafenamide (TAF) has recently been approved that might be safer still, but as a new drug this is much more expensive. In the struggle to work under ever-reduced budgets, the NHS has decided to only use TAF when kidney problems are a concern. This is defined as having an eGFR that is under 60 mL/min/1.73 m2 or it getting close to this. As normal eGFR can be above 90 mL/min/1.73 m2, a little reduction from using tenofovir DF is thought okay. Any small changes when used as ART are often reversible when stopped, for example if switching to TAF later. Also, tenofovir DF is safe enough for HIV negative people to use this as PrEP.

Finally, Birmingham is in the Midlands and East of England NHS region and the policies and patient information is excellent and easy to see.

Each of the seven regions in the UK has its own guidelines and pricing structures for commissioning HIV drugs and so in Birmingham this is organised in broad bands of similar cost treatments. This makes it easy to change to other treatment in the same band or a closely similar band – see graphic above.

More information on drug choice and prices in Birmingham is available in two excellent online resources. One is non-technical patient leaflet and the other is the full commissioning guidelines. both are from February 2017.