Film review: How to survive a plague – the early years of ACT-UP New York 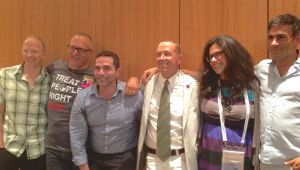 On Monday evening, a few blocks south of the conference centre, a preview screening took place for a film tracking ACT-UP from the first meetings though to the arrival of the first effective treatments.

The film tells the story of how people came together to organise  to overturn the way that research, drug regulation, medicine and science worked in the US, fighting ignorance, indifference and prejudice. It is that simple and dramatic. And many activists who followed, myself included, recognise that little of the current work we are involved in today would have been possible without their previous achievements. 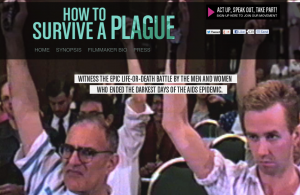 Other actions that used media attention to force political change included unrolling a giant replica condom over the home of the homophobic Republican senator Jesse Helms, closing the FDA with thousands of demonstrators to change in the mechanism for regulatory approval for life-threatening conditions, holding a “die-in” in St Patricks Cathedral in response to Catholic directives against using condoms, and in 1996, scattering on the White House lawn the ashes of their friends and lovers as a last act of protest.

But the change came not just from shouting and protests – though that potential brought weight to the groups demands. Behind the scenes ACT-UP members became sufficiently expert at research and science, to be able to draft the first strategic agenda for HIV research and some of the first industry trials and taking the stage of International Conferences to launch this. They were able to get the FDA to overturn the decision to refuse approval for a drug called DHPG (proven to save the eyesight of people with CMV, later called ganciclovir). And they forced open the secretive world of FDA committees – “why should science be shrouded in secrecy?” so that public involvement set new standards. Even when scientists recognised that nothing was certain the interactions with the activist led to personal responses that “we have no right to say we can’t do this”.

One activist emphasises that although the film ends in 1996, what happened after this is even greater, involving treatment activists who changed the world under much harder conditions. David Barr was one of a handful of ACT-UP members involved in ACT-UP’s Treatment and Data group who went on to found the Treatment Action Group – a group that continues today to be one of the leading HIV treatment policy organisations in the US.

Having spend many years developing support for international HIV projects, and still visibly moved from having watched the film in which he was featured, he finds the current IAS conference difficult: “The meeting is full of good people saying the right things, but there is no passion here. The scientific breakthroughs over the last two years are so dramatic. Treatment as prevention closes the circle, but the rhetoric of “a world without AIDS” will not make anything happen. Everything is really just falling apart, and if it falls apart now we will never get it back together. Activists need support and money. If we want any of this to work – treatment as prevention – we need community activism and yet we have little or no funding. Just let the Russian activists here talk about what they face every day – what they are doing now is just as brilliant as anything we did.”

See this film to understand and appreciate your history. See it to learn and to be inspired that change can happen and, finally, to document and tell your own histories afterwards.

Due to be officially launched in the autumn, it has also been shown recently in the UK as part of the East London film festival.

How to Survive a Plague,

A second film chronicling the history of ACT-UP called “United in Anger: A history of ACT-UP” has been produced by Jim Hubbard and Sarah Schulman of the ACT-UP oral history project and based on many of the extensive interviews with over 140 activists. Transcription of these are available online including for many of the activist included in both films.