A simple ask in 2016: the UN goal of universal HIV treatment

This post is about two open meetings I attended this month at the United Nations as part of preparations for the upcoming UN High Level Meeting on HIV/AIDS in June 2016. These meetings were for community input into the next UN declaration on AIDS. 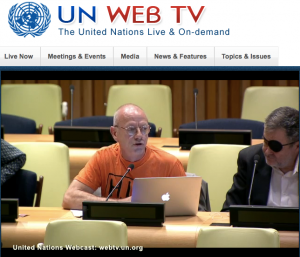 Last week, the working draft for 2016 UN Political Declaration on HIV/AIDS was released with only a few days for comments. [1]

Called the Zero draft, like previous statements produced every five years, it is a list of observations, comments and goals. [2, 3, 4]

The final document will become a UN resolution at the High Level Meeting on HIV from 8–10 June 2016. [5]

The 15-page statement is a resource to collectively hold countries accountable for their response to HIV/AIDS.

Even though very few people living with HIV are likely to read the final document, it will be referenced by activists working in very difficult circumstances, especially for the rights of some of the most vulnerable people. For this reason, many of the demands and observations focus on getting international recognition for people who are already marginalised.

But using the UN Statement as a platform of human rights has become disconnected from the scientific and medical advances in HIV over the last five years.

Yesterday, a smaller meeting allowed advocacy groups and individuals a chance to comment on the Zero draft. The comments were limited to three minute statements – and generally covered the similar ground to the current draft. A webcast of this 45 minute meeting in currently online. [2]

My statement is included below.

“Thank you to the chair, honoured delegates, colleagues, comrades and global activists for the opportunity to comment on the collaborative Zero draft.

I have been a treatment activist for the last 20 years, based in London, but active with colleagues in several international community networks.

As someone living with HIV reading the Zero draft, I expected to see a clear statement on the need for universal access to HIV treatment on the first page – not having to search for this in subpoints of pararaphs 58 and 63. From a scientific and medical perspective, the 2016 Zero document, for all its important demands, could largely have been written in 2011.

As community activists feeding into this process, I cannot imagine anyone here who doesn’t see the universal right to treatment as essential. Or anyone currently on HIV treatment who would volunteer to give it up.

More importantly, ask any person living with HIV, in any country, what they want and their list will include access to good treatment near or at the top.

I would like to therefore propose for consideration a clear and simple new paragraph on the first page – at number 4 or 5 that:

Recognises the importance of universal access to HIV treatment, for all people living with HIV, supported by WHO 2015 consolidated guidelines that state: “antiretroviral therapy (ART) should be initiated in everyone living with HIV at any CD4 cell count”.

This proposal is supported by the “Right to life” in Article 3 of the UN Universal Declaration of Human Rights and in Article 12 (on access to treatment) of the International Covenant on Economic, Social and Cultural Rights.

In 2016, WHO guidelines support this based on randomised clinical studies that provide the highest quality of clincal evidence.

Without treatment HIV is a fatal disease.

In this High Level Meeting, we should be putting together community demands based on best evidence in 2016.

Universal access is an essential part of both 90:90:90 and 2030 goals and as such it should be explicitly included.

Some countries have already achieved 90:90:90, or will do so shortly, and as a community we should be looking beyond this in a document that has a five year shelf life.

We should be stating that 90:90:90 misses almost 30% of people living with HIV and that this is not acceptable.”

Although the comment period for the Zero draft was only two days, the Chair and cofacilitators at the meeting encouraged continued feedback directly to the UN. For this to be most effective this should also be to your country representatives and delegates that are attending the meeting in June.