The first conference of the Southern African Clinician’s Society burst into life with a demonstration by the Treatment Action Campaign (TAC). TAC were unequivocal that repurposing d4T at any dose is not an acceptable way to conquer cost concerns with treatment scale up in South Africa. TAC then joined a packed auditorium to hear the pros and cons of a proposed non-inferiority trial of 20 mg d4T vs tenofovir, presented by Francois Venter, the trial’s principle investigator, and MSF’s Eric Goemaere, who agrees with the community that the trial is not a good idea. 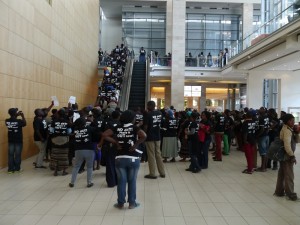 On numerous occasions, activists from the south and north have made it clear that we want to say goodbye to d4T . Goemaere included many of our previous objections – at 96 weeks the trial is too short to answer its own safety question; the 1990s d4T parallel track programme of over 10,000 people showed 15% with neuropathy in those receiving  20/15 mg (although better than 21% with 40/30 mg); and research showing people receiving concurrent TB treatment are at increased risk of toxicity (regardless of d4T dose). He then added a few related to newer data, including a study showing  early mitochondrial depletion among  South African patients receiving low and standard doses of d4T.

The debate did not start well, with the moderator quoting a description of patients as people who, “cannot help themselves” (two brilliant documentaries, TAC: Taking HAART and How to Survive a Plague, the story of ACT UP, might correct this perception), but livened up during the presentations and discussions from the panellists and audience. Venter’s arguments focused mainly on cost saving, which, although remains an advantage of d4T, the more optimistic among us expect ongoing research into treatment optimisation plus alternatives in the pipeline to address this in the not too distant future. Recent stock outs of tenofovir in South Africa, causing substitution with d4T, were universally agreed to be a problem, both there and in many other settings. Opinions varied as to whether potential issues with supply provided any justification for the trial.

TAC’s Vuyiseka Dubula who has been an outspoken opponent of the trial and the use of d4T in poor countries reminded us why she would not take the drug herself, nor recommend the trial to her family or her community. Graeme Meintjes of  GF Jooste Hospital and University of Cape Town argued eloquently for evidence that a threshold exists between 20 mg and 30 mg, below which unacceptable d4T-associated toxicities can reasonably be expected not to occur, to justify conducting the trial.

Eric Goemaere’s closing remarks, in which he stated that HIV must not go the way of TB treatment, which hash’t changed since the 1960s, resonated.  Indeed, we should remember that for HIV, innovation has been nimble and we have seen big demands and bold aspirations. Seeking a comeback for a drug virtually abandoned in rich countries does not fit with this history, nor does it serve the community well.