Methmephangee – ChemSex vs recreational drug use 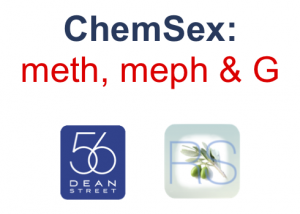 A definition of ChemSex, proposed by activists from 56 Dean Street and ReShape makes the essential distinction between ChemSex and recreational drugs for sex.

ChemSex is NOT the same as recreational drug use.

It is a specific form of recreational drug use.

This is important for health workers and researchers who are working in this field but who perhaps have limited personal experience of meth, meph and G. These are the three key drugs that characterise a much more complex situation.

For lots of people, including gay men, alcohol and drugs are an important part of life. ChemSex is different to this.

The text is pasted below, also available as a ChemSex definition PDF leaflet.

ChemSex is a common term used by gay men
on sexual networking sites and smartphone Apps.

ChemSex is NOT the same as recreational drug use.

It is a specific form of recreational drug use.

ChemSex is defined by the use of three specific drugs (“chems”) in a sexual context.

These three drugs are meth, meph and G.

ChemSex involves using one or more of these three drugs, in any combination, to facilitate or enhance sex, with or without other drugs.

ChemSex commonly refers to sex that can sometimes last several days. There is little need for sleep or food. The heightened sexual focus enables more extreme sex, for longer, often with more partners and with less fear of STIs including HIV and HCV. Sharing injections is common.

Reasons for ChemSex are similar to using other drugs.

However, side effects from ChemSex both when high and afterwards are more severe than other commonly used recreational drugs.

ChemSex is associated with more extreme behaviour and risk:

These links have been well documented at GUM/HIV clinics in London over the last decade.

London has the most concentrated ChemSex culture in Europe and perhaps globally. Similar trends have been observed in larger cities in Europe, the USA and Australia.

Other recreational drugs are also used in sexual contexts. They can also play a role in ChemSex, but this is less important than use of meth, meph and G.

This definition was drafted by ReShape’s ChemSex lab and 56 Dean Street as contribution to the ongoing dialogue on MSM and sexual health. It was drafted to help health workers and researchers understand differences between ChemSex and recreational drug use.

56 Dean Street is the first UK GUM/HIV clinic to provide ChemSex support to MSM around drug use, sexual health, and sexual wellbeing. It receives over 100 ChemSex referrals each month.