WHO 2015 guidelines: newly recommended generic ART products on the way for adults 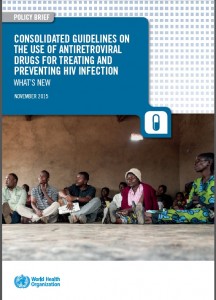 Generic versions of newly recommended antiretrovirals and fixed dose combination (FDC) regimens will be available for adults this year and next. But for children key formulations to implement 2013 recommendations are still unavailable.

Among the many announcements and outpourings on 1st December 2015, was a stealth policy brief by World Health Organisation (WHO) at ICASA summarising what’s new in the upcoming consolidated ART guidelines.

The revised guidelines include 10 new recommendations, most importantly on universal eligibility for ART, so more people will start ART earlier. Since IAS 2015 WHO has released a couple of sneak previews and we await more details in the full guidelines, expected in the next few months.

As well as clinical recommendations (including using antiretrovirals for prevention for all populations at substantial risk of acquiring HIV) the document has guidance on service delivery to support implementation. WHO notes that for the first time recommendations include good practice statements on interventions where the benefit substantially outweighs the potential harm.

New recommendations for second line ART are shown in Table 2. Those include ritonavir boosted darunavir (DRV/r) or raltegravir (RAL) as alternatives to boosted lopinavir (LPV/r) for adults and adolescents. For children RAL-based second-line is recommended after  LPV/r-based first-line.

Similarly to the 2013 guidelines, third-line includes new drugs (if available) with the least risk of cross resistance to those used already.

For adults and adolescents, three new agreements – announced by the Clinton Health Access Initiative (CHAI), UNAIDS and UNITAID, also on World AIDS Day 2015 – will help to implement the new guidelines. Table 3 shows the generic ART pipeline associated with these agreements.

Under the first, Aurobindo will make generic DTG available for US$44 per patient per year (pppy), once it has been approved. CHAI and colleagues say the leadership of the Government of Kenya partly made this launch price possible. Kenya will include DTG in its national guidelines and start providing it to suitable patients as soon as it is approved.

ViiV licensed Aurobindo for generic DTG and the single formulation is already filed with the US FDA for tentative approval. Aurobindo will also file a DTG-based FDC with the US FDA by the third quarter of 2016.

Secondly, Mylan will file for US FDA tentative approval of an EFV400-based FDC in the first quarter of 2016. Once approved this alternative  FDC regimen will be available for $US99. CHAI and colleagues note that this price represents an 8% decrease from current ones, which could mean potential savings of US$80-100 million globally through 2020.

Both DTG and EFV400 are recommended as part of WHO alternative regimens for adults until there are sufficient data for pregnant women and people on TB co-treatment. Studies in these populations are planned or already underway.

The third agreement is a partnership between Janssen (the originator manufacturer of darunavir) and CHAI to develop and deliver a heat-stable version of DRV/r for low- and middle-income countries. This boosted protease inhibitor is finally included in WHO guidelines as part of alternative second- and third-line regimens. One reason for this delay was the lack of a generic heat-stable version of DRV/r. CHAI is partnering with Hetero to develop this co-formulation and the generic manufacturer plans to file for regulatory approval by the third quarter of 2016

Table 3. New generic antiretrovirals, co-formulations and FDCs in the pipeline

Providing all this work goes according to plan, there should be generic FDCs available to implement first-line recommendations and a new generic option for second- or third-line for adults and adolescents by the end of 2017. CHAI and UNITAID are also committed to supporting other generic manufacturers who can develop these products for stringent regulatory approval and/or WHO pre-qualification. They note that the manufacturers included here are closest to such approval.

But, appropriate FDCs for children to implement recommendations still lag behind that of adults. Formulations that were missing and needed to implement the 2013 WHO guidelines – particularly LPV/r-based FDCs for younger children and EFV/ABC/3TC for older ones –  are still notable by their absence.