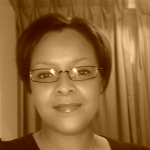 Angeline Marang was actively involved in voluntary work with Treatment Action Campaign (TAC) on grass root level in South Africa since 2001. She assisted in workshops, to being in HIV Support Groups and mostly mobilising amongst the youth of South Africa.

She was a youth leader on branch level in Cape Town, where challenges that South African youngsters were facing were being targeted. She was mostly used for her language skill as being bilingual, when it came to translating information in workshops amongst the community. She has a B.A. in psychology and the real life experiences though community work ground and inform the theoretical aspects of her studies.

In 2001 she was part of the Kraaifontein Youth Project in Cape Town where she was a Peer Counsellor. In 2006-2007 she volunteered at Somerset Hospital in Cape Town, South Africa where she counselled patients in the Trauma Unit and assisted nurses in the Children’s Ward and other activities. In 2005 was an HIV counseller at Mitchell’s Plain Day hospital as a volunteer.

At i-Base, Angeline was in charge of subscriptions and managing the office. She also assists coordinating i-Base treatment workshops with other community organisations.