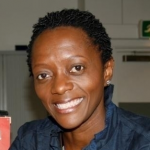 Winnie Sseruma worked with HIV i-Base from 2007 to April 2011 as a Treatment Development Officer. Her role involved working on the phoneline, answering email questions and leading on the African Outreach Project.

This project was developed following a needs assessment survey, which was reported in detail in ‘Assessing the treatment information needs of Africans living with HIV: An evaluation after 10 years of HAART’. This has formally informed i-Base development work with African communities for the last three years.

Winnie has been working in the HIV sector in the UK in various roles for more than 10 years. She has worked as a freelance consultant in HIV social research, written numerous articles on the needs of people living with HIV and spoken at many conferences and meetings including at the 2006 UN General Assembly Special Session on HIV (UNGASS) as part of the UK delegation.

In 2005, Winnie helped to initiate a project for young people in Uganda. Together with community members of a small village called Kajjansi, they set up a breakfast club (Bridging A Gap Community Initiative). The organisation was set up to provide food for vulnerable people to receive food before they go to school to help improve their concentration. The project now has about 200 youngsters of school going age and is still growing.

In the UK, Winnie still volunteers for a number of organisations including the African HIV Policy Network, the UK largest African organisation on sexual health and HIV. She was the Chair of the organisation from 2001 – 2007. She is also a trustee for Tackle Africa, an organisation that uses sport to communicate health messages to young people.

Winnie has been living with HIV since 1988.